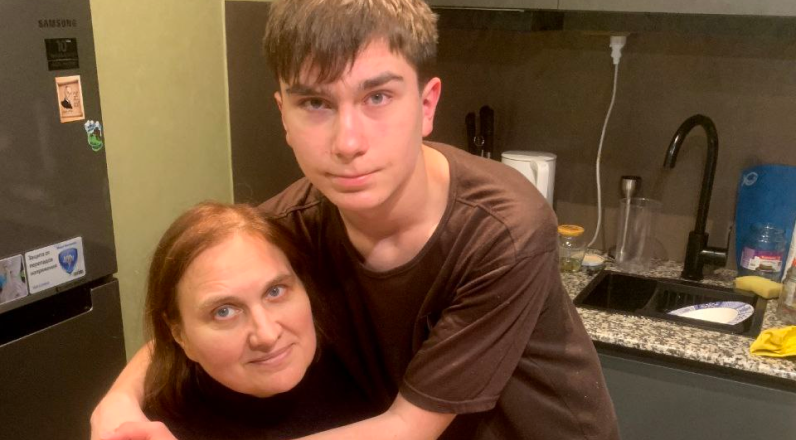 On March 23, 2022, late at night, there was a fist knock on the metal door of Oksana Baronova of Minsk when she was already asleep but heard a loud bass: you have one minute, your time is up! The door was opened by my 13-year-old son German, six masked OMON riot police burst in, two of whom hit the child's head against the wall once each, the boy had a hematoma on his forehead, his vision suffered a severe loss and he began stuttering.

The riot police burst into my room with submachine guns and they didn't turn on the lights, they shined their flashlights in my face. They pulled me down on the floor in my bra and panties and shouted: get down on your knees, bitch, put your hands on your head and put your face on the floor or you'll get a machine gun. I said, 'What's going on? The second says: on the floor and muzzle up quickly. Between them “it?”, the second replied in the affirmative. They gave me a couple of minutes to put on my clothes and took me to the police station in Orlovskaya Street. I asked them: What about the child, he is here all alone? They replied: it all depends on you! They took away my laptop, my tablet, my felt-tip pens and my son's old gouache.

I was interrogated for hours by the investigator. He told me that I was the organizer of a chat room in the yard and that I could face eight years to life in prison for group terrorism. I explained that these were the usual help groups: to find a dog, to help fire victims and orphans. All night I was interrogated and then I was put in the monkey house. In the afternoon of the next day the investigator said: They'll let you go until the trial, but on the condition that you give an interview to a journalist and answer what I say. I had to agree, my son was alone at home.

In front of the camera I had to say: I went to the marches, it was my own stupidity, I drew posters for the protests, but I realized everything, our state is good. The journalist summed up: I'll have to “sweat”, but I'll edit it well! The recording was stopped several times, it was hard for me to say it all.

In the end they let me go at 6 p.m. and drew up a report, but they forgot to serve the summons. My frightened son met me at home; the neighbors helped him. At that moment I felt like an insect in an iron can, in which I was running in hopelessness, and they could drop something in the can at any time or crush me. I sat on the couch and didn't know what to do.

I contacted my daughter through her friends, she was running away from the “chemo” for helping the wounded at the protests, in a difficult situation herself. But she helped me to escape quickly with my son from Belarus to Tbilisi. We borrowed money from everyone we could. I still have an apartment and a job in Minsk. How do I feel? Yesterday I thought I wanted to “jump out the window”, at the age of 53 to go nowhere with a child is scary, there is no more money and strength. And it is very scary to realize that the regime has committed genocide against its people by holding on to power."

2000 euros — for health insurance, to have Oksana and her son examined, for tickets to Lithuania, for food and to rent a house in a foreign country for the first time.