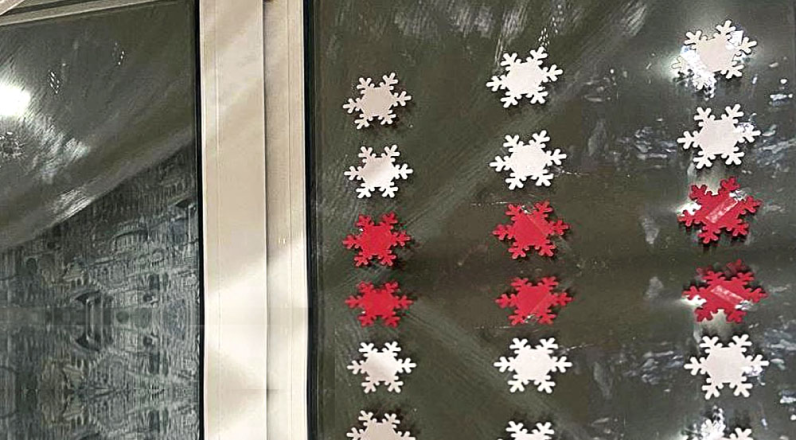 Good afternoon, my name is Catherine, I was detained at home in April for white-red-white snowflakes on my loggia window. I am 6 months pregnant and have been on maternity leave since June.

They took me on a bus for a few hours, picking up other citizens with “illegal symbols on their windows. After that they drew up a report under Article 24.23 of the Administrative Code for an unauthorized event (picketing) and let me go home.

I had collected all kinds of documents (certificate of income of 500 rubles according to the contract, an exchange card with confirmation of the pregnancy term, checks for large sums of money for medicines, which I still have to buy to this day because of complications, etc.) in order to minimize the fine or at least get an installment payment. But obviously, the verdict had been handed down before the trial, and the review of the case was just a formality.
During the trial, based on the judge's questions, it turned out that in order to place the Christmas decorations I had to get permission, otherwise it was considered picketing. At the same time no physical documents were attached to the case by the court, because on the date of detention there was nothing on the windows. Also, according to the ruling, my pregnancy and low level of income were not reasons for mitigating the decision and I was given the maximum fine (100 basic units.), to be paid within a month.

I had to change jobs because I was not allowed to exercise, and a large part of my income was spent on medicines, because I had been in and out of the hospital for a long time because of my health problems.

Instead of buying all the necessary things for the baby at least for the first time, it turned out that in our state, which "supports" young families and the birth rate, all the money my husband and I collected went to fill the pockets of the higher persons and to support the Home Guard.
I am asking for a little help for me and my family. Despite of all difficulties, I am not discouraged and I don't regret about my political activity, I am optimistically expecting changes in our country and I hope that my child, for the sake of whose bright future I am doing all this, will be born under new legitimate and fair authorities!