Support for Severin Kwiatkowski, subjected to violence and “psychological experiments” 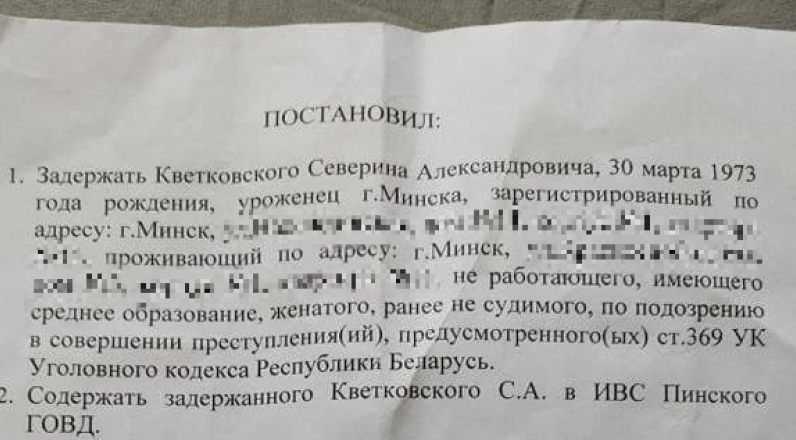 On January 19, 2022, the riot police and GUBOPIC burst into the Minsk apartment where Severin Kwiatkowski was living. Severin was detained with the use of electric shock. He was declared a defendant in the criminal case for “insulting a policeman in the performance of his official duties”. Specifically, for the fact that Severin posted on YouTube a video where a juvenile affairs inspector talks profanely to teenagers. The title of the video includes the phrase “scoop cattle.”

Severin was taken to the Investigative Committee in Pinsk, as a criminal case was opened there. In Pinsk Seviaryn was placed in the TDF for three days.
According to Seviaryn Kviatkowski, in the period from detention until his release, various officers had the initiative to talk to Seviaryn about Radio Liberty.
From the officers' conversations Severin concluded that they wanted to make him like Protasiewicz-2 on Radio Liberty. Only not through beatings, but through deformation of the psyche in various ways, as well as through blackmail about the initiation of a criminal case.

3,500€ — help in organizing Severin's relocation to one of the free countries; means of accommodation for the first time.