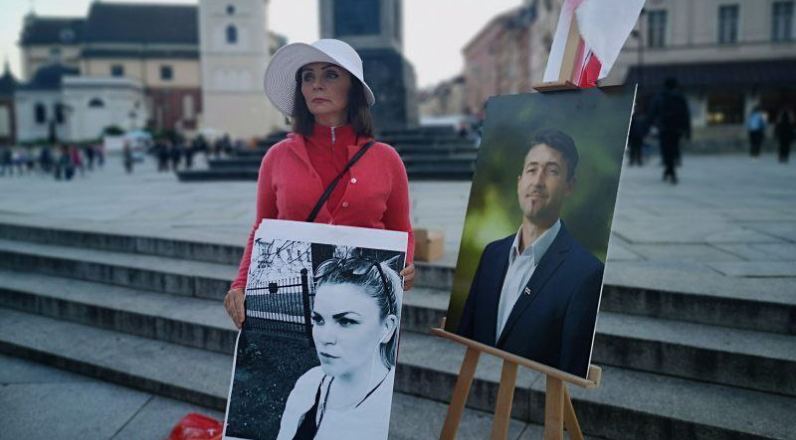 My name is Yulia Goryachko and I am a human rights activist from Belarus. I cooperated with MGCI “Our House” and HRC “Legal Assistance to Population”. During so-called “presidential elections” of the Republic of Belarus in 2020 I was an observer from democratic forces of Belarus at polling station № 1 and fixed a lot of violations. I have written more than 10 complaints about violation of Electoral Code of the Republic of Belarus.

During 2020 and till the moment of illegal detention I helped repressed citizens who were against illegal elections of 2020 and members of their families. The assistance concerned paying for lawyers, food and medical parcels, and rehabilitation means.

On 15.07.2021 she was seized by dictator Lukashenko's accomplices during the sweep of Belarus from human rights defenders, activists and journalists. You can read more about her detention here.

I was tortured for a week in the TDF in Okrestin Street. As a result of this torture my chronic diseases of the spine and other organs worsened, as well as a number of new diseases. Then I was charged under Part 2 of Article 342 of the Criminal Code for allegedly “sponsoring riots. The charge was brought because the criminal regime "proved" that I had helped 178 citizens of the Republic of Belarus to draw up documents for protection of their rights and to find lawyers. I admitted my "guilt" in court, as I really helped citizens to fight against Lukashenko's regime.

On March 15, 2022 I was charged with "other preparation of persons to participate in group actions that grossly violate public order, or active participation in them" (part 2 of article 342 of the Criminal Code) under the chairmanship of judge Sergey Shatilo. The court found me guilty and sentenced me to 1 year in jail, but they counted the time I spent from the moment of my detention as 1:1.5 and released me in the courtroom.

The apartment where I lived was searched, after which all my means of communication, a laptop, a camera and money were confiscated, which were later found to be "instruments of crime" and seized irretrievably. I was threatened in prison that another criminal case would be opened against me. Because of this I had to leave the country. Now I need help to recover, adapt and continue my relocation.

2060€ — funds are needed to buy equipment to continue my human rights activities and work; medical examination and treatment; purchase of medications, back brace, knee brace, medications and rehabilitation procedures.