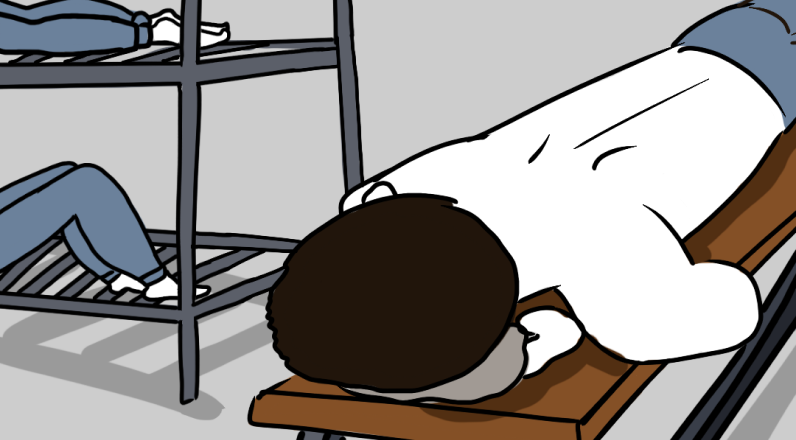 I was previously active in the Justice March, where I was photographed, videotaped, and posted on the internet. After some time the police investigated me and eventually found me in October 2021. They detained me and searched me in order to find the suit, but they didn't find it. Then they took me to Okrestino for 10 days, where I slept in a punishment cell on the concrete floor with other people. There were about 5-8 of us in a very small room. In Okrestino they beat us and tortured with the light on, then sent us to SIZO 1.

I was detained for four and a half months. I was kept in a cell of about 20 square meters, with 15 people in it. Then there was an investigation and my case was closed in January 2022. Then I had to wait until my case was in court. The trial was set for March 17. At the trial there were interrogations and questioning of a witness who was among the marchers. He identified me.

The prosecutor requested 2 years of restriction of freedom with a referral to an open correctional institution, as well as a lawsuit in the amount of 48 thousand Belarusian rubles. The lawyer tried to ask for restriction of liberty without referral, but in the end it was rejected. On March 18, I was released from custody in exchange for a pledge not to leave. A couple of days later my lawyer wrote an appeal to the Minsk City Court, but the appeal was rejected. The verdict remained unchanged.

On June 20, 2022 I was summoned by a criminal executor, in order to be directed to Mogilev IEP-43 to serve my sentence. On June 23, 2022 my sentence began. I realized that it was very hard to be here without money, work and going out into the city for 4 hours. You are always under the supervision of police officers, because you are placed on the professional register.

My relatives try to support me morally and physically by sending parcels and some pennies. They are also trying to feed themselves, pay for utilities, as I have to pay monthly rent, buy clothes and groceries, send medicine. I would be very grateful to anyone who would express support for me in this difficult stage of life.