Aid to a disabled person of the 2nd group 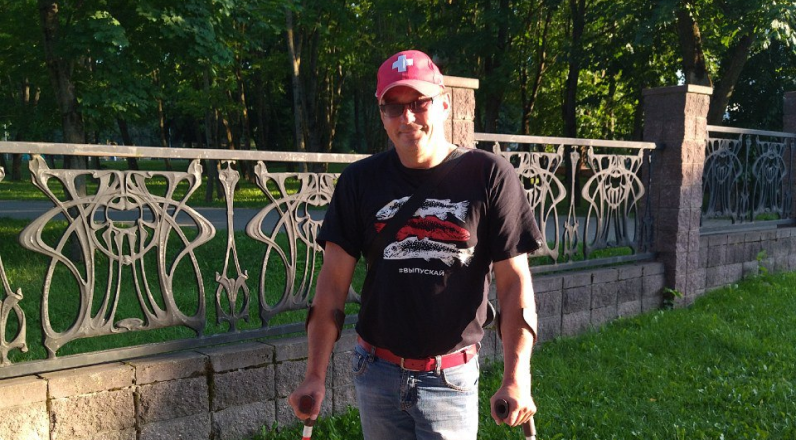 I, Sidarovich I.E., having the 2nd group of disability on the musculoskeletal system (left leg above the knee was amputated after the accident), understanding what is happening in the country after 9 August 2020, I could not but express my civic position together with the Belarusians.

The prerequisite for this was hounding with dogs and illegal beating of my son on the central square of Molodechno in front of his girlfriend, friends and the whole city. Later he was repeatedly detained and fined under Article 23.34.
Participation in rallies, protest marches, chains of solidarity, photo and video appeals to the Belarusian people, participation in the marches of people with unlimited opportunities in Minsk on Thursdays was a vivid expression of my attitude to what is happening in the country.

In November 2020 I and a group of people blocked the central street of Molodechno with a banner — “As long as there is lawlessness in the country — it is our duty to resist. Two guys were arrested the next day and were kept in pre-trial detention for over 5 months. I, my son and his girlfriend were arrested at the end of December under Article 342 part 1 of the Criminal Code. I was kept for three days in the TDF and then placed under house arrest pending the trial. The sentence was 1.5 years for all the guys with a referral to chemistry, a girl son for 1 year with a referral, and to me, given that I'm disabled group 2 — a fine of 140 basic units, a woman with minor children — 160 b.v.

Even before this court decision, a criminal case was brought against me under Article 369 of the Criminal Code "insulting the honor and dignity of a representative of the authorities". Specifically: the head of the Molodechno District Department of Internal Affairs. The Court of Appeal in Minsk left the verdict unchanged in my first case. The court sentenced me under Art. 369 to 1.5 year without referral, as well as to pay moral damages of 1500 rubles to the "humiliated and insulted by my actions, which caused great mental suffering, the head of the Molodechno District Police Department. The verdict is under appeal.