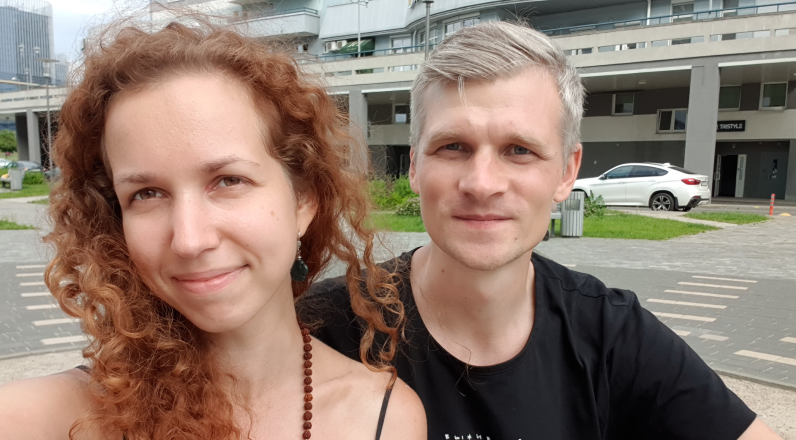 Dmitry Zavadsky has been active in political life in Belarus since 2004. He participated in most of the protests, was the chairman of the United Civil Party of Bobruisk, a participant of the tent city after the 2006 elections. He was repeatedly detained and intimidated by the KGB and police; he received a day in jail, was expelled from the university, in 2008 a criminal case was initiated. In 2018, Dmitry met Olga Kosenchuk, and since then they have participated in protest rallies and flash mobs together.
At the beginning of the election campaign, Dmitry helped the staff of Svetlana Tikhanovskaya, and the guys also spread through social networks some of Sergey Tikhanovsky's ideas-proposals: about creating district chats in each polling station, about mobilizing people to go out on election day to their polling stations, etc.

In September, Dmitry and Olga created a Telegram channel “Lebyazhiy 97%” and became administrators of the chat room. Thanks to the channel and the chat room, over 70 courtyard meetings were organized, including public meetings with politicians and public figures, concerts of Belarusian stars that supported the mobilization and the spirit of the people.

Activists were at most of the marches of the protest year, in the epicenter of the events, filming what was happening on video, publishing it on social networks and on the YouTube channel. Dmitry gave various interviews with stories about the events to the press. Olga organized one of the women's actions in Minsk.

These are not all of the activists' activities, but those that can now be spoken about openly.

The admins have been trying to find out all this time in various ways. They were arresting neighborhood activists and monitoring whether this affected the moderation and content of the channel. As part of such a raid, Dmitry was arrested for 15 days. But Olga, having access to the account, was able to fully preserve his communication style and deflect suspicion.

The very next day after Dmitry's arrest, the first summons arrived for Olga. Later there were several more. The police came to my parents several times and threatened them with problems at work. Toward summer, Dmitri received new invitations to the law enforcement agencies. The police came to his home.

On July 2 a pro-governmental TV-channel published screenshots from a small private chat with Mikolam Dziadok, where Dmitry was also present. Olga and Dmitry were at Mikola's trial and the next day the propagandists published these screenshots. In the chat the activists discussed the expediency of a tent city on the square, the principles of road blocking, etc. The propaganda presented it as a discussion with the aim to spread these ideas in the society and influence the actions of the protesters.

On the day of the publication of these correspondence, Olga and Dmitri left Belarus, as there was a direct threat of arrest, searches and confiscation of equipment. The guys left at night for Russia, and from there Olga went to Warsaw and Dmitriy to Kiev.

Since they left promptly, they left almost without their belongings. Dmitriy did not even have time to go home. We had about 300 euros of money for both of us, which we quickly ran out. Due to the fact that much time was spent on socio-political activities, we did not work actively last year, so we had no financial reserves. There is an unpaid loan for $2000 in Belarus.

We need money for rent, to move Dmitry to a safer European country, to buy necessary things for life, to buy food.