Helping an activist family rehabilitate a child with developmental disabilities 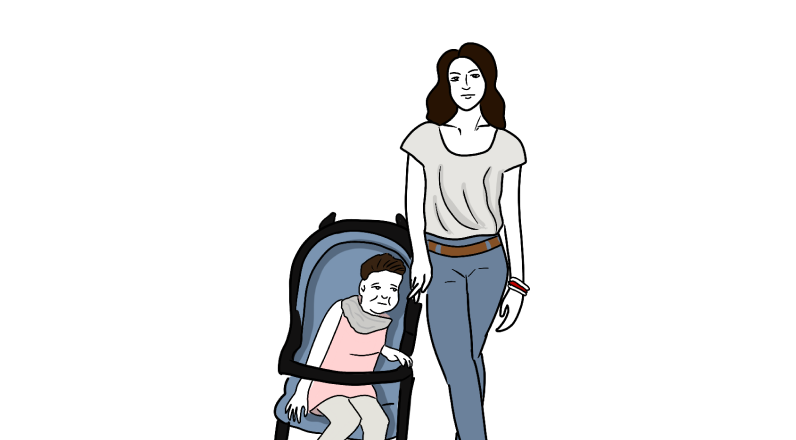 Our story began when we were at home in Belarus. We got a call at the door. Four riot policemen with submachine guns, a search warrant and a warrant for the detention of my husband under a political article rushed to our house. My son was four years old and I was eight months pregnant. They searched the house, took my husband away to an unknown destination, they did not explain anything to me. My son was very frightened and I was very stressed. That day I found out that my husband was under interrogation and they would take him to a TDF. I had no more information.

By evening I felt that the baby stopped moving. The next day I felt bad and went to the women's clinic. There, after the examination, they sent me to the maternity hospital, since the baby's condition was not satisfactory, there was no movement. I was hospitalized.

On the third day after my husband was detained I was operated on by emergency caesarean section as the baby was in danger. The operation was difficult, with complications, great blood loss and transfusion of blood components.  The situation with the baby was also difficult. The girl was born with the weight of 1800 grams, 48 centimeters, she had breathing problems, inflammation of both lungs.

The baby was in intensive care for a long time. Then we had lots of intestinal problems: baby couldn't assimilate milk, she was switched to enteral feeding. Several weeks later when her condition stabilized, she was admitted to the hospital for intensive nursing. Only then I could be with my baby, even though she was in separate wards. There, the baby was in the incubator, as he could not keep warm on his own. During her stay, there were other problems and diagnoses. The daughter had severe anemia with a transfusion of blood components, and intestinal problems. There was encephalopathy of prematurity and neurological problems, bad ultrasound. After discharge from the hospital we continued to take neurological medications at home. We could not achieve any rehabilitation at the initial stage.

We started to prepare to leave for Poland. We left as soon as we got visas. We had only 3 suitcases and a baby carriage with four people and it was in a sad state now. We started our lives from scratch. We spent all our savings to pay for temporary housing for the first month, and the rest was spent on mortgage and permanent housing. My daughter needs expensive formula feed from birth, because she is allergic to cow's milk protein. The children need toys, winter clothes. The older child goes to kindergarten. There is only one father working in the family, and there is enough money to pay the rent and very little money left over. Children's allowances in Belarus were deprived after going abroad.

We are in a difficult financial situation. Here we went privately to a pediatrician, a neurologist, and received recommendations for further action. Now my daughter is 11 months old, and the girl is not sitting up, does not stand up, her right arm is very bad. The diagnoses of cerebral palsy and brain damage are in question. In order to find out exactly what the problem is, you need an urgent MRI of the brain in a hospital under anesthesia. This is an expensive procedure. But at the same time, the child needs a long rehabilitation period. Due to the long waiting list for rehabilitation, we decided to go to a private clinic, because time is running out.

If we begin intensive rehabilitation sooner the chances of a favorable outcome and a normal, full life for the child are high. We are thankful to everyone who is willing to help.