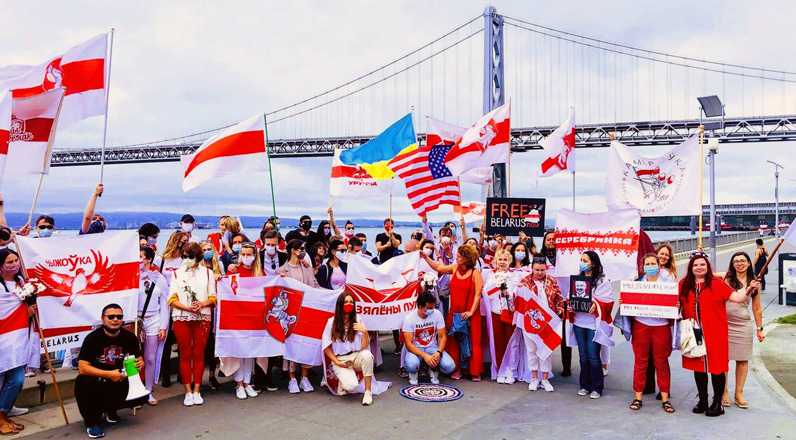 Help Belarusian community in California raise funds and support residents of protest Belarus courtyards who have found а creative peaceful way of resistance to the brutal violence of dictatorship.

Even though major peaceful half of a million people protests of August-September 2020 have been suppressed in Belarus by different law-enforcement agencies, residents of Belarusian towns and cities didn't give up. They've regrouped and formed local communities of their residential buildings – so-called “courtyard initiatives”.

These communities are natural grass-roots activities that work independently from each other and in their own creative way, they continue to pressure the regime. Among their instruments are: local marches, meetings, and gatherings; flash mobs; Belarusian flag installations; self-published pamphlets; challenges; drawing workshops etc.

These activities allow courtyard initiatives to find and gather local supporters of the opposition, help families that have suffered from political repressions, in the absence of independent media, inform residents of the true state of the country.

Why do we care?

Belarusian community in California and other diasporas abroad have come together to support our people in their protest for the right to choose, for dignity, freedom, and independence.

What will the funds be used for?

The objectives of our fundraiser are to provide financial support for new grassroots initiatives of protest courtyards.

Donating via HRF, a reputable US-based charity, allows to receive tax deductions on you donations under the US law, and take advantage of company match schemes.

Donors outside of the US can also support specifically California for Belarus Courtyards directly via BYSOL.