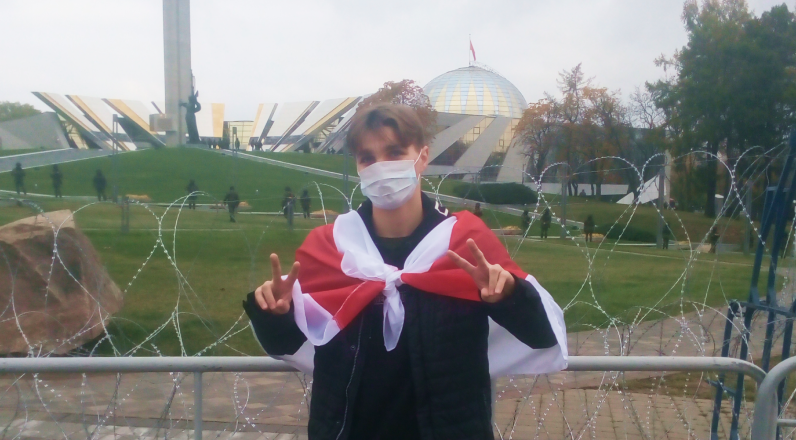 So, on 02.11.2020 at 15:30 there was to be a rally at BNTU, to which I called all those who were not indifferent. Before the rally began, a man with a camera on his collar came up to me and asked for my identification documents.  That same day I received a call from the dean of my department and was summoned to the rector's office with my guardians.

In the course of the conversation he said: “Unfortunately for you, Trofim, and especially for you, Svetlana (my guardian), your child is not just a participant, but also an active organizer of protests on the territory of BNTU. That is, 50% of the protests at the university are organized  by him. Yes, "piy piy"? (that was my telegram nickname at the time). And the competent authorities figured you out”.

The rector suggested two ways out: either I write a letter of dismissal, or they hand the data over to the prosecutor's office, with all the consequences. My guardian, who by the way does not share my civic position, did not accept any attempts to take my side, to ask for evidence, to find out what the competent authorities and so on, but on the contrary recognized the threat to the national security of Belarus in the face of me and decided that I had to write a statement because *quote the provost: “no other choice”. At the time, I was also a little scared of the word “prosecutor's office” and was leaning towards the option of a statement. I was also told that as soon as I write, everything will stop, nothing will be transferred anywhere, I will remain with a clean biography, next year I can again enter where I want, that orphan benefits remain with me, and otherwise the handcuffs (the provost said this word very often).

After a while I realized that it would be foolish to waste a year and decided to set a goal to save up on a camera before June 1 in order to try to make this craft in the future the main source of income. At the time I filled this form, I have saved 1/3 of the cost through freelancing and other remote work. I can not go to normal work since I am a minor and my guardians do not approve.

How much do I need?